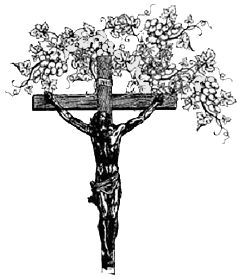 And I say also unto thee, That thou art Peter,
and upon this rock I will build my church,
and the gates of hell shall not prevail against it
(Mt.16:18)

Two thousand years ago in these words God’s Son Jesus Christ proclaimed to the first of His Apostles Simon-Peter about the beginning of creating a great secret, which He called His Church. This promise was kept at Pentecost, when according to the Risen Teacher’s Directions the Apostles together with Mary assembled in Jerusalem, waiting for something unusual. And this came to light, as the Holy Spirit descended on them in the shape of fire tongues, and Christ’s disciples inspired by Him addressed a sermon to the amazed people of Israel. And each word of the Apostles was filled with such strength that three thousand people joined them in the Sacrament of Baptism. In this way, on that uncommon day Christ`s Church where the Divinity united with the Humanity, as if Heaven met Earth, came into being.

Catholic Church Means Universal
Go ye therefore, and teach all nations,
baptizing them in the name of the Father, and of the Son, and of the Holy Ghost ,
teaching them to observe all things whatsoever I have commanded you
(Mt.28:19,20)

At all times these words of Jesus Christ are called the Great Mission. They explain the reason why Jesus Christ united his followers and formed one Holy people, who are named the Church. The Church came into being to proclaim the Good News, the Gospel, to all the nations. In ancient times in Greece and Rome people named lands known to them the Universe (Oecumenia in Greek). Fulfilling their Teacher`s Mission, Christ`s Apostles brought the Word of God to all the countries known to them, even to the border of Oecumenia. Many peoples, who had believed in their own gods before, accepted one true God about Whom Christians preached. Gradually humanity was expanded; unknown lands, new continents with people populating them were discovered. Christ`s true disciples rushed to newly discovered lands after pioneers in order to proclaim the News on God`s Crycified Son to the people living there. Thus, the Church, which once came into being (was given rise) in Jerusalem, have converted many nations, the whole world to the faith in Jesus Christ and have become the Universal (Catholic) Church.

It was surprising that the Lord Jesus Christ did not entrust that enormous authority, vast powers of this sort to a scholar-theologian of that time, or a great king, and He entrusted it to an ordinary fisherman of Galilee. You see, before The Apostle Peter was called to follow Jesus Christ, he had fished in the Lake of Genesareth and had never dreamed that he would be the rock on which the Church would be built. God does not think as a man does. Formerly Peter was a fisherman, now he is Bishop of Rome, the First Pope. There he walks after his guardsmen to the Cross, on which he as well as his Lord will be martyred and rise to the glory. After taking Peter the Lord did not leave His Church on Earth without a shepherd who could look after Her, protect Her from all kinds of splits and false doctrine. Each bishop who fills the Holy See after the Holy Apostle takes the very power that Jesus Christ entrusted to Peter. He serves as the symbol of unity of the Universal Church spread all over the world. Thus, the successor of the first Apostle Peter, Pope helps Christians to be sure of their accepting the same faith as Christ passed to the Apostles and so this faith is protected from all kinds of errors and heresy.