…and whoso shall receive one such little child in my name receiveth Me.
(Mt. 18:5) 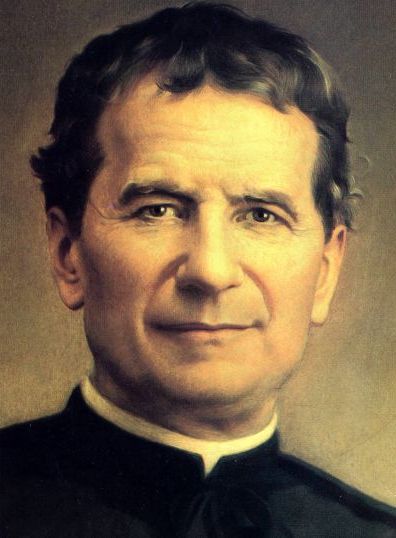 Don Bosco Don Bosco`s Salesians is a monastic order of the Catholic Church founded in the middle of the nineteenth century by the Italian priest Giovanni Bosco, canonized later on. The primary task of the Order was to serve youth selflessly

In the middle of the nineteenth century Italy had hard times, the country was being torn apart by political contradictions and developing into armed resistance of quarreling parties and groups. Besides this, Italians were being defeated by the Austrian-Hungarian army; all of this could not help telling upon ordinary people. Crime and unemployment were rising and the number of the homeless increasing. Together with adults the children suffered; a great number of teenagers left to the mercy of fate, were made homeless, deprived of parents, homes and sometimes even of daily bread; they packed the slums in Italy`s cities and towns, joining bands of thieves. Italy`s authorities did not take care of them. Nobody took care of them except the Lord; perhaps, it was at that time that He sent them St. Don Bosco.

Don Bosco was born in a poor farming family; he lost his father at the age of two and was brought up by his mother. His mother Margaret was a devout and pious woman, she began infusing Giovanni with love for Jesus Christ and his precious Mother since his early boyhood; she also taught him to work properly so that any affair of his glorified the Lord. When Giovanni Bosco was nine years old, he had a prophetic dream in which Jesus Christ Himself entrusted him an affair to which the boy would have to dedicate all his life. In that dream the Majestic Lord and the beautiful Lady showed little Giovanni a field full of fighting children, then the Virgin showed him fighting cubs which with a wave of her hand turned into humble lambs. In this way she entrusted Giovanni Bosco with caring for children for God. That dream disclosed Giovanni what his life work would be and on leaving the Seminary and the Theological College in Turin, June 1841, Giovanni Bosco was ordained priest.

In December of the same year in Turin he organized the first Salesian home for poor and homeless urchins which he named Oratory (in Latin oratio – prayer); boys could stay in the Oratory or just come there to play or work, for prayer and worship. Overcoming enormous difficulties, fighting for children`s souls, Don Bosco was learning to carry out what had been entrusted to him by God. Young people abandoned to the most evil influences, children and juveniles, whom people considered to be useless and needless, were the object of his activities. He went down to the very bottom of life for them, elicited them from the dark gulf of despair, sin, crime, hatred and gave them hope for life full of dignity and meaning, full of the joy of meeting Jesus Christ

On January 26, 1854 Don Bosco founded the Monastic Society of St. Francis de Sales, known as the Salesians of Don Bosco (SDB) at the present. The Charter of the Society was definitively approved by blessed Pope Pius IX in April 1874. Reaching manhood, Don Bosco`s former inmates joined that monastic congregation in order to continue the cause begun by their loved father. Towards the end of the founder`s life, the Society consisted of 773 members and there were already 64 houses of Salesians in 6 countries: Italy, France, Argentina, Spain, Brazil, and Chile. In 1872 St. Mary Dominica Madzarello founded the Community of Religious Women, Daughters of Our Lady and Help of Christians, to help poor girls. Don Bosco also established a third order, the Salesian Cooperators, to assist in his worldwide ministry. By the time of Don Bosco`s death in 1888, a hundred thousand apprentices had already been trained; Sts. Dominic Savio and Luidjy Orione being the most famous of them

By the time of Don Bosco`s death in 1888, a hundred thousand apprentices had already been trained; Sts. Dominic Savio and Luidjy Orione being the most famous of them. In our country Salesians are the head of the Mission of the Roman Catholic Church. In Baku there are seven Salesian brethren from Slovakia, five of whom are priests. Thanks to their efforts in Baku there exists a Catholic parish, Maryam School, a charity canteen and relief funds for the poor, various courses and Catechetical Instruction for people who want to be baptized are given. In 2002 under the monks leadership on the plot of land given as a present by Azerbaijan`s President Geydar Aliev, there was built the Church of Mary`s Immaculate Conception. In the future, the Salesians are planning to open a home for youths, like the oratories that St. Don Bosco founded in Italy and worldwide. At present Father Vladimir Fekete is the Superior of the Salesian Community in Azerbaijan.