Skip to content
For I was hungry and you gave me food, I was thirsty and you gave me drink, a stranger and you welcomed me, naked and you clothed me, ill and you cared for me, in prison and you visited me.
(Mt.25:35,36) 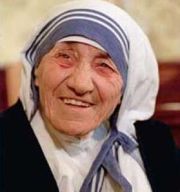 Mother Teresa of CalcuttaThe Missionaries of Charity is a conventual congregation of the Catholic Church. It was founded in 1949 by the Albanian nun Agnes Bojaxhiu, who the whole world knows under the name of Mother Teresa. No doubt, the whole world knows Teresa of Calcutta. In it there is no overstatement and there is nothing to be surprised at. What was said by the Lord, to Whom Mother Teresa served all her life, was then fulfilled, “You are the light of the world. A city set on a mountain cannot be hidden.” And she was such light for humanity, the light of Christ`s love, which she advocated with zeal. She brought love to the people who had not believed in it for a long time: to beggars, to sick, homeless and abandoned people, showing them that in Jesus Christ’s eyes they were not less important than kings and presidents. Mother Teresa did not admit the difference in estates as well as Jesus Christ does not do it, she spoke to the King of Norway or the Pope as simply as she spoke to a beggar from Calcutta or a common novice. She knew everyone needed love, and so she said that loneliness and the idea that no one wants you was the most terrible sort of poverty.

At first in their Order there were eleven women who followed their foundress in 1949; including the Mother there were 12, as well as Christ`s apostles. Nowadays thousands of sisters inspired by Mother Teresa work throughout the world; they are not interested in politics, economics or national ideas; they are entrusted with the mission of proclaiming God’s thirsting love to humanity. Nobody can hear ardent sermons from them, they do not teach theology or engaging in commenting intricate stories from the Bible. Their truth is plain: first of all love is an action and they act as far as they can; God gives them strength; besides God the nuns do not have another source of strength and means. They come to any unknown country, where most people have never heard anything about the Catholic Church or Mother Teresa, taking only a white blue-bordered sari, prayer-books and church plate with them; everything else is God’s deed.

In Azerbaijan the Sisters of Charity have been working since 2005. Ten years ago on the Apostolic Administrator Monsignor Giuseppe Pazotto`s initiative Albina, one of the Sisters of Charity, who then worked in Tbilisi, wrote Mother Teresa a letter in which she made a request to open a home in Baku. Mother Teresa supported that idea, but unfortunately at that time there were no free sisters who could organize a shelter in Azerbaijan, but ten years later Sister Albina was already at the head of the Missionaries of Charity in our country. According to her, for Mother Teresa opening houses of charity in all the fifteen republics of the former Soviet Union was a deed of great importance and Mother Teresa had no doubt of carrying out this intention. In December 1988 on Christmas Eve, Sister Albina and Mother Teresa were in one of Moscow’s hospitals together; there the famous nun lit fifteen candles in front of the home-made manger and promised that houses for Jesus (she named her shelters like that) would open in all the15 republics of the USSR. In May 2006 in Azerbaijan a home for the homeless and unfortunate was established; it became the seventeenth on the territory of the former Soviet Union and four sisters from different parts of the world worked in this house. Now there are five sisters there.

The home is situated in the settlement of Zikh near Zikh road; its doors are always open for those who do not have a parental home and daily bread. Anyone who would like to help the nuns will also be given a hearty welcome there. It is possible to get to know all about the House of Charity in detail at the corresponding page of our site .